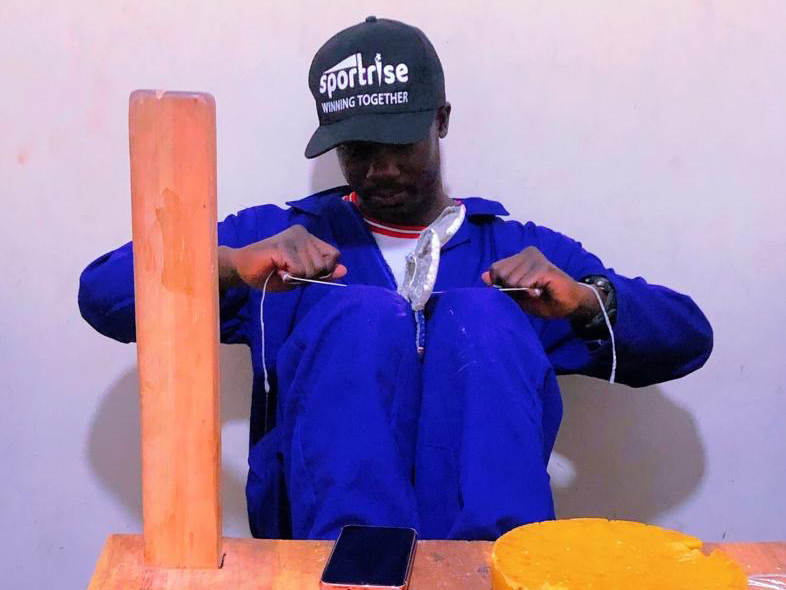 Douglas Smith is passionate about sports. Amordates date back to when the gentleman was young, barely old enough to go to school. Whenever he had the opportunity to play, it was football; football as some would like to call it.

Fast forward, Smith took his love even further to play soccer for several clubs. During the years he played, Smith always used banana fiber balls because he couldn’t afford them in the market.

‘Ehihajo’, they called them. “Ehihajo” was the runyankole word used to refer to an expensive ball. What troubled him was that despite the fact that the bullets were imported, they were not durable, and yet cost an arm and a leg to buy.

So over the past three years, Smith, who runs a nonprofit called “The Smith Soccer Foundation” that uses the power of football to make a positive social impact in communities, has embarked on research that would later see him create his own soccer balls out of recycled plastic.

“Most of the soccer balls used in Uganda are imported. There was no football manufacturing company in Uganda. Most imported soccer balls are very expensive and not very durable. I also found that in Uganda over 2000 metric tons of waste is generated, of which around 30% is plastic.

“After doing intensive research and studies, I had the idea of ​​making soccer balls locally from recycled plastic waste,” he reveals, regardless of whether he is pursuing a degree in technology from medical laboratory.

At the dawn of 2020, Sportrise was born. Sportrise is a social enterprise in Ibanda that locally manufactures sustainable and affordable soccer balls from recycled plastic waste.

Smith’s raw material is polyethylene terephthalate (PETE) which is the most common type of plastic in Uganda as it is derived from disposable plastic water and soda bottles. It takes about 100 plastic bottles to make a ball.

At Sportrise, Smith directly and indirectly employs 27 people, including those who collect plastic for recycling. In one year, the 27-year-old earned around 12 million UGX selling soccer balls and sportswear.

While Sportrise’s customer base is predominantly sports shops, local clubs, businesses, schools, individuals and politicians, the young boy from Mirambi Cell, Ibanda district, has now launched into in a partnership with football clubs to increase its sales.

“Last year we signed a MoU with the Ibanda Municipal SC 3rd Division team as the official kit sponsor for a 2 year contract, while they also play with our Sportrise balls. . We plan to partner with many other clubs, ”he explains.

But being a first-time business founder venturing into virgin territory of local football manufacturing, Smith has faced some challenges.

“Uganda does not have a soccer ball manufacturing plant where the team can compare themselves to learn more about the ball manufacturing process. This requires flights out of the country, which is costly for a startup. The heavy dependence on imported products also limits the acceptability of my local product, ”he says.

Smith is qualified by MTN

Sportrise was the big winner of the MTN ‘For Good Campaign’ after taking the victory out of 100 participants who took part in 2020.

As a result of his victory, Smith received a free pass to the MTN Foundation Youth Skills Program (MYSP) which aims to inspire and empower young people to become job creators by imparting business knowledge to them. and financial and digital skills.

The MYSP, a partnership between MTN and Ubinufu systems, welcomes 100 participants trained in law and taxation, essential IT and technical skills among others.

“As a first-time founder, it was difficult to run a start-up and lead my team, but with the MTN Youth Skilling program I now have over 80% of the skills. I think in the future I will do my best not to make mistakes.

As a winner of the For Good campaign, Smith received 60 GB for 6 months, which he used to undertake more research and manage his website. In addition, says Smith, endorsement of MTN’s “For Good” campaign has enabled Sportrise to win several competitions and raise funds.

Nelson Munyanda, Senior Director of the MTN Foundation, says Sportrise is an example of a green business that fits in with MTN’s environmental and social governance policy.

“He seeks to preserve the world through waste management, which is a challenge for many in Uganda. At MYSP, the goal is to empower young people to create ICT-based solutions to challenges in their community and I think Sportrise is talking about it, ”he notes.

Like any other startup, Sportrise still faces challenges that it will have to overcome before it can pursue its ambition to grow and compete in the global market.