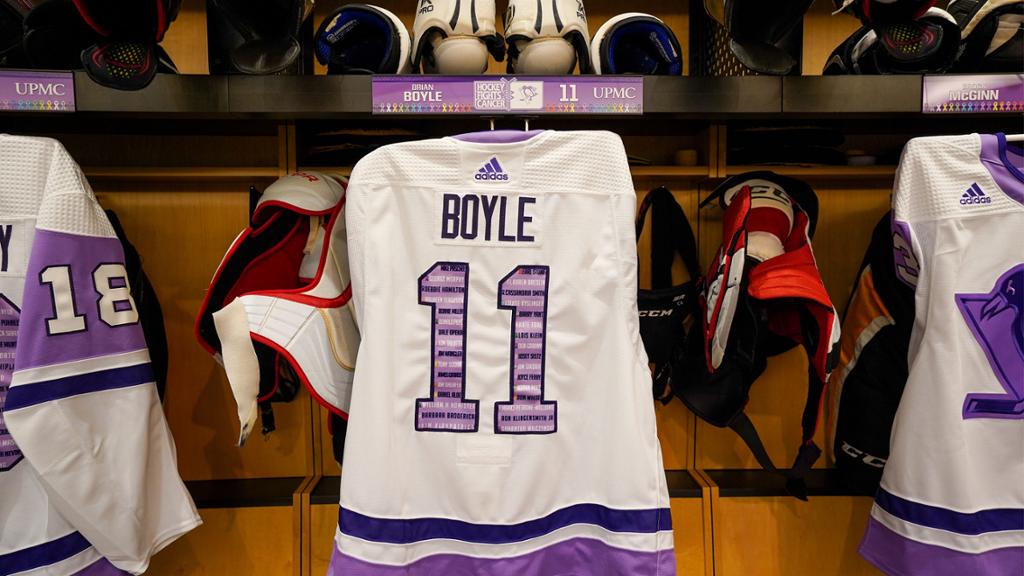 After Bruce passed away on December 28, 2011, he requested to be buried in his beloved Penguins sweater, and his family members wore theirs to the funeral home. So having his name on the numbers on the Penguins Memorial Warm-up Jerseys for Hockey Fights Cancer Awareness Night is something that would have been so exciting for Bruce.

“He would be so honored and so humbled,” Carl said.

The back numbers of the warm-up jerseys for tonight’s game against Philadelphia feature a total of 200 names, which were submitted by Penguins season ticket holders.

These names honor the membership holders themselves, as well as their immediate family members who have been touched by cancer. It could be the name of someone who is currently battling cancer, a survivor, or someone who has lost their battle.

“The ticketing group was the driving force behind this idea,” said Amanda Susko, senior director of foundation programs and strategic planning for the Penguins. “They had learned a lot of stories from their own season ticket holders who had cancer, or from family members who may be currently battling cancer. They wanted to see if we could use the jerseys as a means of recognizing those who are fighting, so it was an initiative really led by them.

And what makes this initiative even more special is that next to each person’s name is the colored ribbon indicating the type of cancer that has affected them. It’s the choice of General Manager Ron Hextall and President of Hockey Operations Brian Burke.

“When we work with Pro Knitwear on jersey designs, they give us a few different options and then we share them with Brian Burke and Ron Hextall via (Chief Equipment Officer) Jon Taglianetti,” said Susko. “Burke and Hextall decide on the design option, and they chose the one that had the colored ribbons. It made them very unique.”

It’s a process that started in August and was definitely worth it, especially after going through the incredibly inspiring tributes that came with each of the names submitted.

“To see how much our team meant to their family or to the improvement process – coming to games and forgetting what happened – I got chills reading some of them,” said Erin Exley, Senior Manager of Penguins Tickets. Marketing and operations.

“There is really a connection to hockey in all of these people’s stories. I think for these families it’s so special to honor or remember or celebrate the person in their life that they share this connection to hockey with, and to give them a little support and inspiration as well. “

This is certainly the case with Chris Houp and his wife Corrie. Chris had started playing hockey at age 3 and skated for several local teams before moving to Boston to play for the Junior Bruins. At the age of 19, Chris was diagnosed with testicular cancer and returned to Pittsburgh for surgery before undergoing three weeks of radiation therapy.

He had to give up his dream of playing professionally, and switching from being at the rink almost every day to not skating at all after his career was cut short caused a huge void in his life – one that Corrie was able to. see after their meeting not long after his last treatments.

“She definitely missed him,” she said. “He didn’t talk much about it, but every time the subject was brought up he had tears in his eyes. Going to the Penguins games is definitely a way to fill that void for him.

Like many fans touched by cancer, the annual Penguins Hockey Fights Cancer Nights have always been especially important to the Houps.

Corrie said that since Chris is so humble about his hockey career and is a cancer survivor, she always gets a “I Fight For” sign with her name on it as well as a lavender t-shirt. Knowing that his name will in fact be on a player’s jersey – including Sidney Crosby’s – makes it all the more striking.

“Right now he’s got tears in his eyes,” Corrie said.

Rosalie Kasperik’s name will be on every number 2, which her family is thrilled about – considering their last name is the first name and initial of number 42, Kasperi Kapanen.

Jim cannot say enough about the wonderful person his mother is because Rosalie is a generous and caring person who always takes care of others. a few years earlier. Rosalie herself is a two-time brain cancer survivor, two tumors of which have been removed since April 2019.

Rosalie is also a huge Penguins fan, who always wears her team gear on game days and leaves family dinners early so she can get home in time for the puck, with Jim trying to get her to. as many matches as possible during the season. They are attending together tonight and can’t wait to see what the sweaters look like in person.

“Being the person she is, she doesn’t need any attention. At the same time, my cousins ​​- who are huge fans – are like, it’s so awesome, it’s such a cool thing. for her, because she deserves it, “Jim said. “So she was very excited.”

That kind of recognition is exactly what the Penguins are looking for.

“It will be so personal for them and their families,” said Cindy Himes, director of community and alumni relations for the Penguins Foundation. “The HFC game is going to mean a lot more to them than it ever would have had before, just because of their involvement in it. They’re kind of included individually.”

“Anytime you can do something with the players that has such a huge impact on season ticket holders, in such a personal way… it really strikes you,” Susko agreed.

The jerseys will be auctioned off and the proceeds will go to the Mario Lemieux Foundation and the UPMC Hillman Cancer Center. It will take place from November 4 to 10. Fans can bid by texting PensHFC to 76278 or by visiting pensHFC.givesmart.com.